One of the most significant and best-preserved archaeological sites in Italy, recognised as a UNESCO World Heritage Site

The Brixia Roman archeological area offers one of the most significant and best-preserved routes in Italy. Recognised by UNESCO as a World Heritage Site in 2011, together with the San Salvatore – Santa Giulia monastic complex, the area has undergone an archaeological and architectural recovery enhancing this extraordinary area and making it fully accessible. 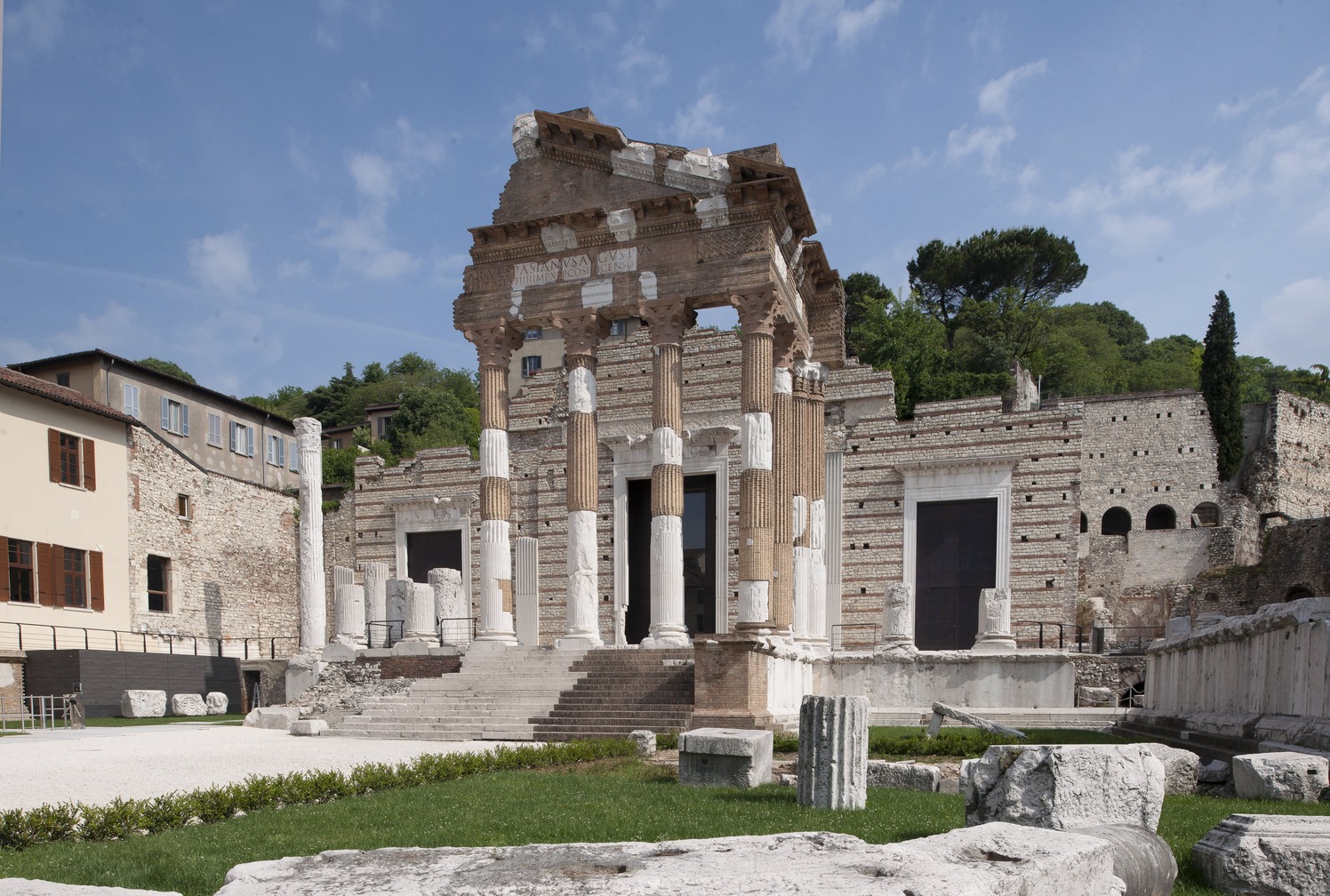 The city of Brescia still preserves the monumental remains of the ancient Roman Brixia, testifying to the city’s long history.

The republican sanctuary (first century BCE), the Capitolium (73 CE) with the remains of the imperial age and the nineteenth-century museum additions, the Winged Victory, with part of the bronze collection and, lastly, the Roman theatre (first – third century CE).

This area has been progressively unearthed and enhanced since 1823, when, thanks to a public subscription, the Ateneo di Scienze Lettere e Arti of Brescia began archaeological investigations based on the few elements that had surfaced on private property. The campaign led to extraordinary results, recognising the Capitoline Temple and many of its furnishings, the Roman theatre and the collection of large bronzes which included the Winged Victory. In 1830, the first of the city’s museums, the Museo Patrio, was inaugurated inside the restored Roman temple.

Underneath the Pallaveri House and the Capitoline Temple are the partially preserved structures of a sanctuary dating back to the early decades of the first century BCE. The remains were identified as early as 1823, studied between 1956 and 1961, and further investigated since the 1990s.

It is a cultural complex consisting of four large rectangular halls placed side by side on a common podium, each with its own entrance and with a pronaos (portico with columns) for access, within a terrace overlooking the decumanus, today’s Via dei Musei.

The interior of each hall presents surprisingly good and well-preserved fresco decorations. Painted white fluted columns, corresponding to the physical columns, amplify the space; mock polychrome marble slabs are supported by a frame, below which hangs a curtain revealing the underlying masonry; the overall decorative apparatus is adherent to Hellenistic models as interpreted by Roman craftsmen.

The discovery of vaulting elements has led to the hypothesis that these aulae were covered by vaults set on a trabeation system or on architraves resting on the lateral rows of columns, as in the classic examples of the nymphaea of the Sillan period or the Pompeian Corinthian oeci.

This archaeological monument, unique in northern Italy, is attributable to high-level workers from central Italy, who were called to construct a building in Brescia to demonstrate the city’s adherence to the cultural model of Rome, in the years immediately following the granting of Latin citizenship (89 BCE).

The Capitolium was the main temple of every Roman city and was the very symbol of Roman culture.

The Capitolium was dedicated to the cult of the “Capitoline Triad”, i.e. the main divinities of the Latin pantheon: Jupiter, Juno, and Minerva. The worshippers would gather in the temple foreground to attend the main ceremonies and sacrifices.

Today visitors can enter the Capitolium and see parts of its original decoration and furnishing. Inside, the original geometric coloured-marble pattern flooring (opus sectile) from the first century CE is still in place. In addition to the Botticino stone altars that were found here in the nineteenth century, fragments of cult statues and furnishings have also been arranged inside the cells. On the walls of the central hall is a display of the collection of epigraphs that assembled in 1830, when the Museo Patrio was inaugurated.

The Winged Victory of Brescia

The archaeological Park is home to the Winged Victory, a bronze masterpiece from the first century CE, which between 2019 and 2021 has been the subject of an exemplary interdisciplinary study and restoration carried out by the Opificio delle Pietre Dure in Florence.

The statue is now in its new collocation in the eastern cell of the Capitolium, in a museum setting designed by Spanish architect Juan Navarro Baldeweg, conceived to enhance the material and formal characteristics of the bronze statue, highlighted by the monumentality of the architecture and a luminous scenography.

The Winged Victory has returned to where it was found: in 1826, during archaeological excavations carried out in the area by members of the Ateneo di Scienze, Lettere e Arti of Brescia, set inside two walls of the ancient Capitolium, this statue was discovered together with six imperial heads and hundreds of other bronze artifacts.

Next to the Capitolium is the Roman theatre, built and extended between the first and third centuries CE.

The cavea, the large space where spectators would sit, set on the Cidneo Hill slope welcomes the visitors evoking the atmosphere of ancient representations.

The layout of the building dates back to the Augustan age (end of the first century BCE – first century CE), and was subject to enlargements and improvements over the centuries, until the architectural decoration of the scene was renovated between the second and third centuries CE.

This theatre was used until late antiquity (late fourth – early fifth century CE). Between the eleventh and twelfth centuries, the stage collapsed, probably due to an earthquake, and the building became an open-air quarry. In the twelfth century documents tell us this space was used as a place for public hearings, but its state of abandon and the crumbling of the hill led to its progressive and definitive burial. 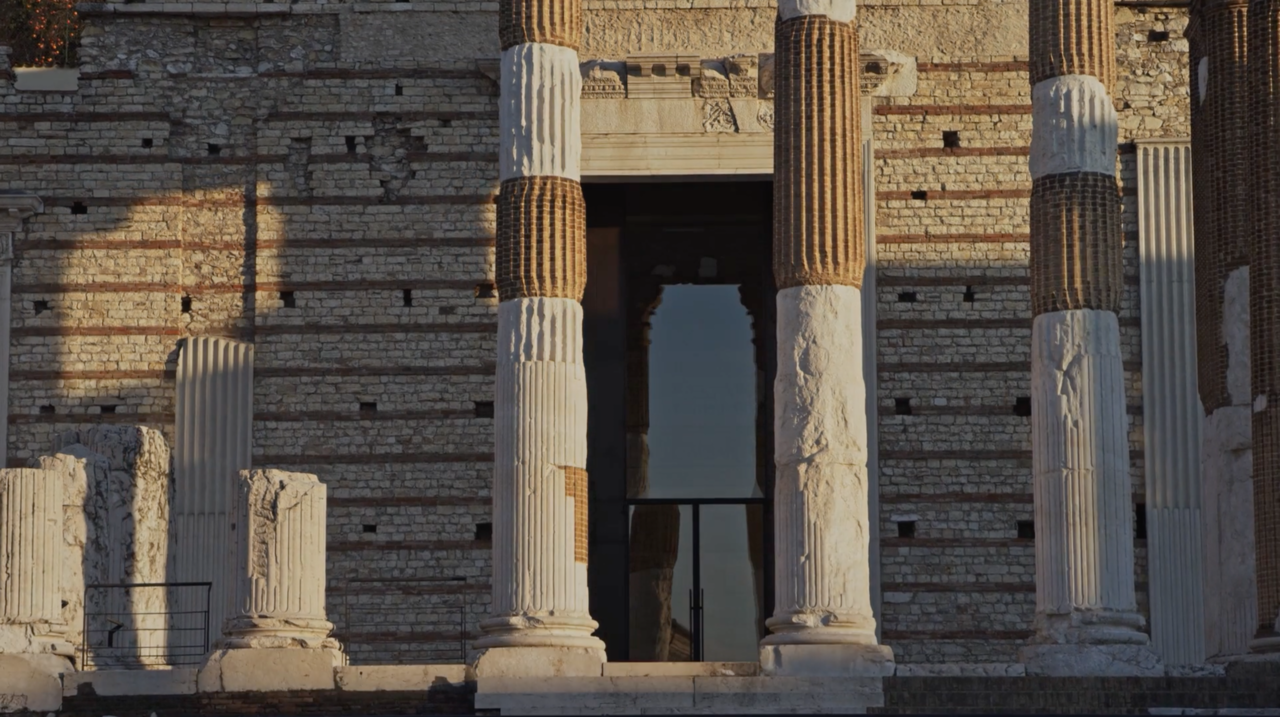 Since 25 June 2011 the Brixia Roman archeological area and the monumental complex of San Salvatore – Santa Giulia have been included in the World Heritage List, promoted by UNESCO in the serial site “The Longobards in Italy. The Places of Power (568 – 774 CE)”.

The area in fact contained numerous traces of the early Middle Ages (pottery kilns, burials, modest dwellings) that testify to the long life of this area. 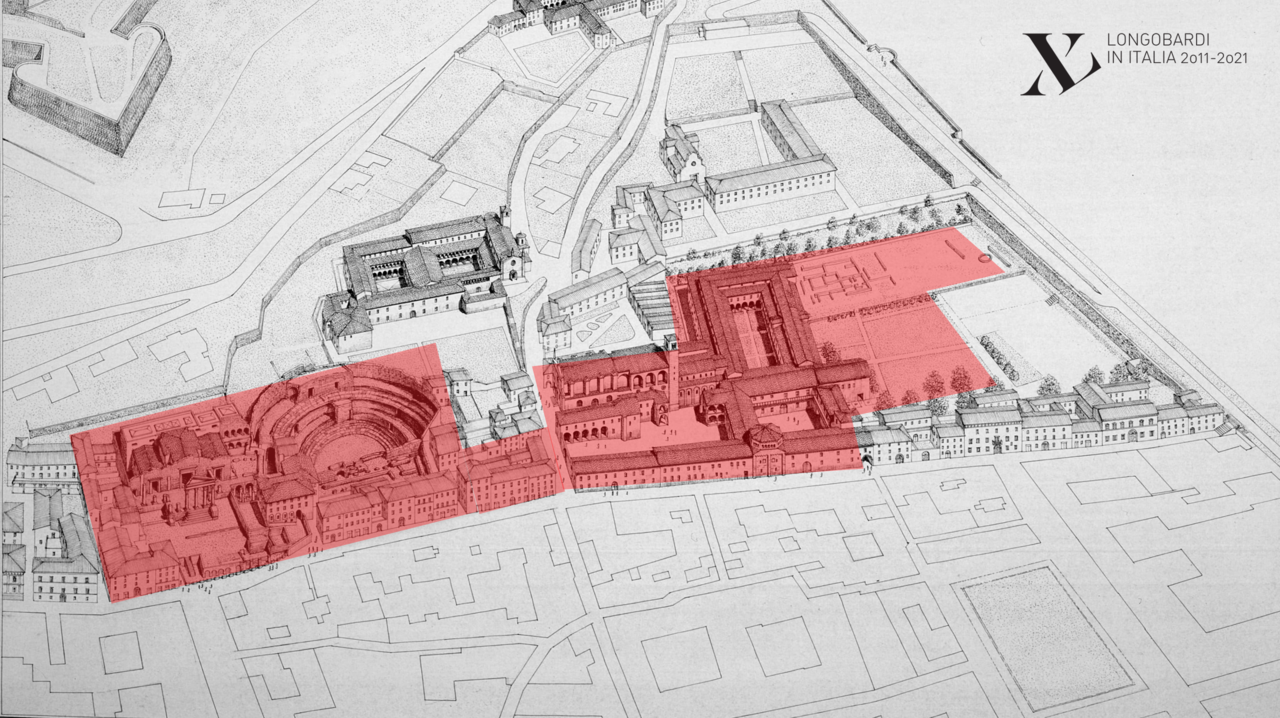 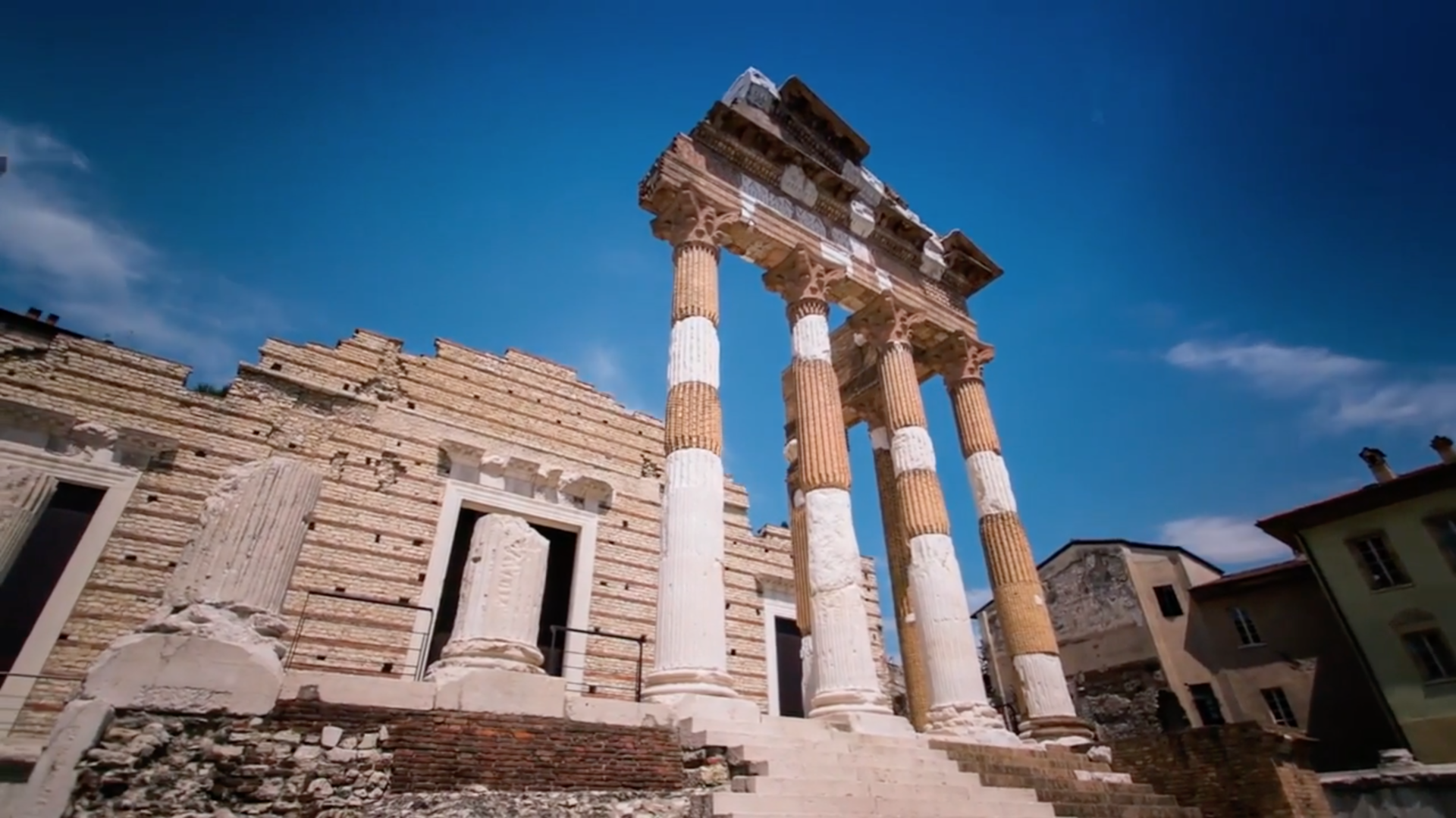 For conservation reasons, the temperature in the museum rooms is maintained at around 20°C. Visitors are therefore advised to bring an over garment for use during the visit.

On Friday 27 January, UNESCO tickets will be free for those born and/or resident in the city of Brescia and its province.

The Roman Brescia Archaeological Park allows direct access to all areas of the museum (ticket office, Republican Sanctuary, Capitolium) thanks a lift connecting the different levels; the entrance to the Roman theatre is accessible from Vicolo Fontanone.

The following services are available to visitors:

The Roman Brescia Archaeological Park is located in the ZTL area (Via dei Musei) and does not have parking spaces.

Fabumouse news for all the little Geronimo Stilton fans: the most beloved mouse journalist awaits all children in the museums of Brescia to start an adventure that will make their moustaches twitch with excitement!

All you need is a smartphone or a tablet provided by Fondazione Brescia Musei to join the exciting adventure “Geronimo Stilton in search of the lost medallion”: at the Santa Giulia Museum children will embark on a mission on behalf of Geronimo in search of a precious hidden medallion. After having answered the questions, won the challenges and found the last mysterious object, Geronimo will invite his little helpers to the Roman Brescia Archaeological Park to end the experience admiring the wonderful Winged Victory, revealing all the secrets of this very precious sculpture.

Thanks to the ArtGlass application – the tech platform to enjoy extraordinary augmented reality experiences –, Epson’s new and exciting Moverio augmented reality glasses, and Telecom Design’s 3D glasses, visitors can admire the archaeological area of Roman Brescia as it was in the Imperial Age.

A unique experience that visitors can enjoy as they walk through the Archaeological Park, seeing 3D reconstructions and immersive virtual reality scenarios with maximum rendering creating a complete narrative sequence.

The Bookshop of the Roman Brescia Archaeological Park, located at the ticket office, offers a wide selection of books dedicated to the museum site, as well as a rich selection of merchandise.

The Museum has a cloakroom area in with security lockers for storing personal items.

Visitors can stop for a break in a small refreshments area equipped with a vending machine for hot drinks and snacks plus a comfortable lounge area.

To facilitate the visit, the Museum has 1 changing table in the bathroom.

Dogs are not allowed in the Santa Giulia Museum and its outdoor areas, with the exception of guide dogs for people with visual impairment.

Photographs with no flash are allowed.

Fondazione Brescia Musei welcomes its visitors to share their photos on their social media channels.

By Bus and subway

Go to the Brescia Mobilità website to discover this bike service

Reach us by train, then from Brescia Train Station: 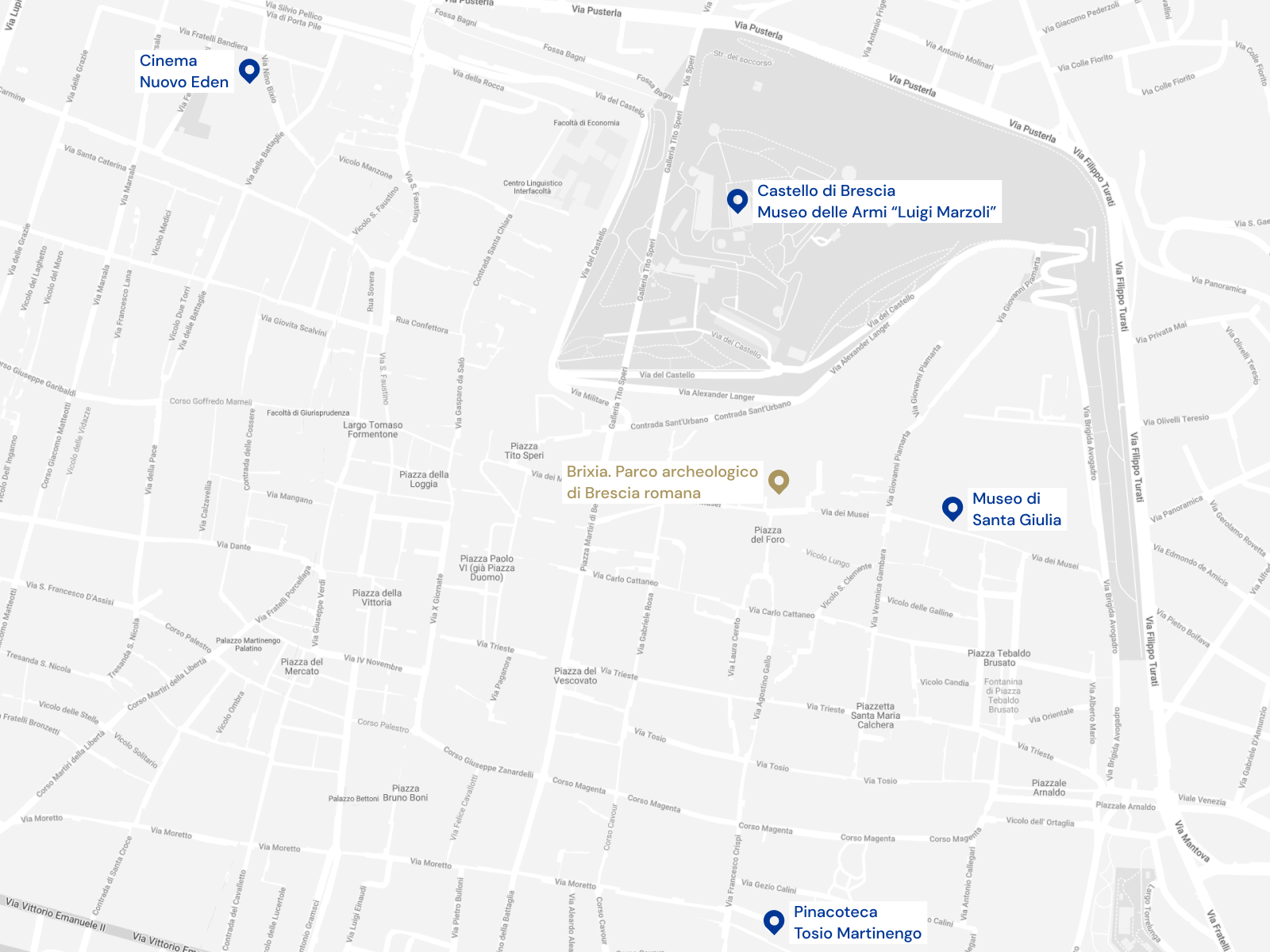